We're having a great time on vacation. There's something about being back in a town you can navigate with your eyes closed (literally) that feels so comfortable. No matter how many places we've been, we know how to be here, and we've fallen into step easily this year 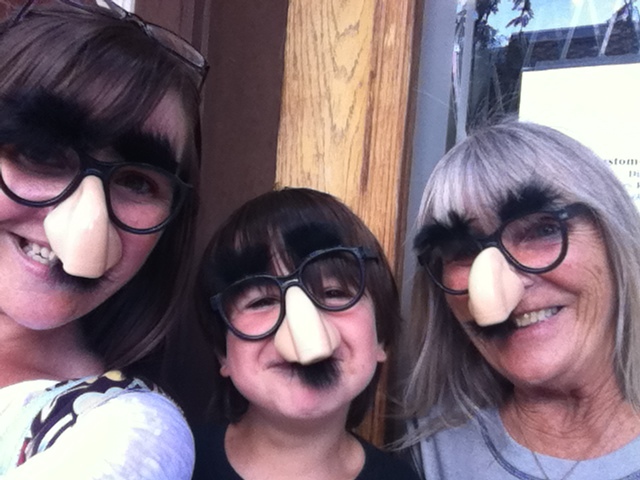 I'm "frantically" trying to get us ready for our annual epic road-trip, and so of course it feels like the perfect time to update the blog :) This year we've made a big addition to the trip in that I was able to procure a cargo carrier for the top, piece by piece, via craigslist and ebay. I'm hoping that this will be a huge improvement to shoving every free spot full of our various accoutrements. *hoping* It's used though, so it's one of the old school ones and stands a good three feet above the car, basically ensuring that at some point I will drive under one of those "Clearance 9'" signs and shear it off. Another "improvement" I've made is that I made a bigger deal about buying snacks ahead of time and I've forbidden C from stepping foot in a gas station on the way. That one backfired already, after I totaled the grocery bill and found that I've invested about $100 in road snacks. Seriously. Maybe we'll be too full for actual food?

You guys cracked me up with your comments from the last post! A few responses:  I would counter that I still hold eating crap as grosser than eating vomit, (brace yourself) because vomit has already been in your mouth  whereas feces was somewhere else entirely. My opinion on penile insertion? First, for the uninitiated, penile insertion is when men stick foreign objects in their, well, in their penile. I've seen, well not SEEN but heard about paperclips, pen fillers, paper, staples, and occasionally bits of chicken bone. This one falls into Not Crazy to me, because I just can't see how crazy people would thing that was a good idea. Also, it's never "discovered" that they've stuck something in there, but rather they announce it to anyone who will listen. Talk about conversations you never thought you'd have. This is also one of the few areas where women don't do anything similar. I remember one woman who used to stick sharp things in her belly, but those were "discovered" so fully in the Crazy category.

And speaking of crazy, I've been watching/reading a lot about the shooting in Aurora. First, I may never go to a movie theatre again. I have no idea how I would react in such a crazy situation (except that I'm certain that neither C or I would put the baby down and run). It's a horrible, senseless tragedy and my heart goes out to everyone who was affected. I'll be interested to watch the trial, and I'm hoping that James Holmes starts talking soon so we'll have a better idea of what the hell he was thinking. I have some thoughts, but I think I want to put more thought into it before I put it out there in the world. For now, based on footage of the arraignment, I think that he's on a whole lot of medication in the jail. I also don't buy the whole "I'm Joker" thing. My guess is that it was a smart-ass comment that made a great media soundbite.

And on a lighter note, I'm still running, but I have no idea whatsoever how far I'm going. I downloaded one GPS program on my phone and was using that. It was consistent but I began to suspect that it was a bit generous. Not much, but telling me that I was doing an 8 minute mile when it was probably more like 10. So that made me question my mileage. On the recommendation of a friend, I downloaded another program so I could cross-check the first one. I had my best run ever, 12 miles in 48 minutes. Seriously. Then I stopped and bench-pressed my car. So I downloaded ANOTHER GPS, and this one tells me that I was doing a 7 minute mile. While I was walking. I'm so frustrated! Also, a little freaked out because I registered for a 10K the day I ran 5.5 miles. Which in hindsight was probably more like 2.5 to everyone in the world except me and my stupid phone.It may be a looooong race.

Okay, back to packing. I guess my family will probably want underwear at some point during this trip, so I should get on it.
Posted by Chiconky at 5:04 PM 2 comments:

Email ThisBlogThis!Share to TwitterShare to FacebookShare to Pinterest
Labels: random

Crazy or Not Crazy?

This is absolutely, without a doubt, one of my favorite parts of my job. Play a little game and get a glimpse of what I actually get paid  to do. Ready? Let's do this! (Break it down!)

The objective is to decide, Crazy or Not Crazy?

1) Anyone who describes themselves as "suicidal" or having "racing thoughts"?  Not Crazy
2) A guy who claims to "just not care" and then one sentence later, complains about the temperature of his food? Not Crazy
3) Anyone, who for any reason, eats shit? Crazy
4) Most people who can't be bothered to put on clothes? Crazy (or gross. It's a gut call)
5) The guy who adamantly denies any mental health problems? Usually Crazy. Tricky, huh?
6) A guy who says that he sees demons? Not Crazy. Bonus points if they're green, have red eyes, or have horns. Super Not Crazy. Also, bad liars and poor researchers.
7) Anyone who smears poop on the walls? This is a tricky one. Did they make eye contact while they did it? If so, Not Crazy. If not, Crazy.
8) The guy who says that everyone's out to get him and that they're planning to kill him? Another tricky one. In the world (aka not prison), Crazy. In prison, you need more information. Because this might be totally legit.
9) A guy who says he talks to God? Again, a tough one. My compass says, if God says nice things, Not Crazy. If God says mean things about the guy, Crazy. If God tells guy to do bad things, usually Not Crazy. See: Bad liar.
10) Anyone who outright calls me the devil, evil, conniving, or guilty of "word fucking" (which makes me sound very talented, don't you think?) Usually Not Crazy.

See? This is a pretty awesome job. And they get more complicated and intricate. I worked with a guy who practiced a religion based on communication with spirits. AND he heard voices. There were a lot of "Was it the spirits or the voices?" conversations. Another guy literally ate a ball of shit, while looking me straight in the eye. Probably Not Crazy, but my deal is that if you're willing to eat crap, I'll give you the benefit of the doubt. That's a commitment that most people do not possess. Another guy refused to meet with anyone for several days, instead laying naked in his room reading a book. Turns out he broke his hip in four places and no one knew. Still Crazy, but maybe notsomuch. Between this and getting to say things like, "Was it a magic coochie?" I pretty much have the most awesome job ever. Except it smells, really really really bad.

Email ThisBlogThis!Share to TwitterShare to FacebookShare to Pinterest
Labels: work

There've been some things going on that aren't exactly worthy of a blog post, but have also been stressful and just blech. I haven't mentioned them either because 1) it's petty and not really internet appropriate 2) it's interesting only to me or 3) it's just petty. For example, I had full-blown work drama, with tears, over a portable room divider. 'Twas awesome, and obviously it cast me in a most favorable and level headed light. (Also, I lost and it stung. I still sit on one side, while the rest of my co-workers sit on the other. Sweet.) The point is, it's been a wee bit stressful. However, I think I'm starting to figure out my own anxiety-reduction recipe. One thing that's helped is our new budgeting system (boring, but helpful). Another has been, believe it or not, running.

I haven't said much about it because 1) it wasn't all that interesting and 2) I didn't want to have to fess up when I gave up on it. But I've stayed at it longer than I ever have in the past, and I'm actually beginning to enjoy it. I think a big difference is that in the past, I was running to lose weight. That's still a goal, but this time I also picked a bunch of races that I wanted to participate in. It's been a great motivation. Because I'm shallow, I picked the races based on the cuteness factor of the t-shirt, so whenever I'm tempted to skip I remind myself that I don't get the shirt if I don't run the race. Whatever works, right?

If I miss a run, I'm less patient and a bit more snippy. Basically, I miss it. And when we have especially stressful days, I'm practically running over C and the kids to run out the door. I don't know that I've experienced the "runner's high" but I have had some very nice, mindful runs. I'm constantly body-scanning. What hurts? What feels stronger? When did that start jiggling? Hey, that doesn't jiggle anymore! And then there comes a point when I have to stop thinking and just focus on putting one foot in front of the other. Occasionally I chant annoying motivational sayings. In my head. Usually.

I have one more run before I've actually finished the C25K program. This has never, ever happened despite starting the program several times since Syd was born. Usually I hit the "Run 20 minutes" portion, do it, and throw in the towel. This morning I ran for 28 minutes! Straight even. It's still not easy, but I'm doing it and I'm happier for it. And if my GPS is accurate (which I'm not sure that it is) I'm doing fairly well distance-wise too. I'm still hesitating to register for a race, but at this rate I should be ready for a 10K at the end of September. And I will wear that shirt every day until it falls off of me. Smiling, of course.
Posted by Chiconky at 8:06 PM 4 comments: 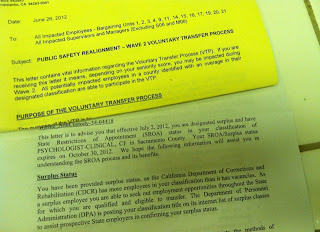 I'm about 90% sure that I won't be affected, but seriously?! And because my bosses are "pretty sure" there's nothing to worry about, no one's being all that proactive. At least last time we were in the loop. Stay tuned. We may be moving. Again.